I will admit off the top that I did not play much of the Mega Man X games…I did not have a Super Nintendo as a kid (I was a Genesis player…don’t hold it against me!), but a buddy and I played the crap out of the 8-bit NES Mega Man games, especially Mega Man 2 (Heat Man…you bastard!).  So, even though this is based on the X series, the piece still has that strong nostalgic power for me. 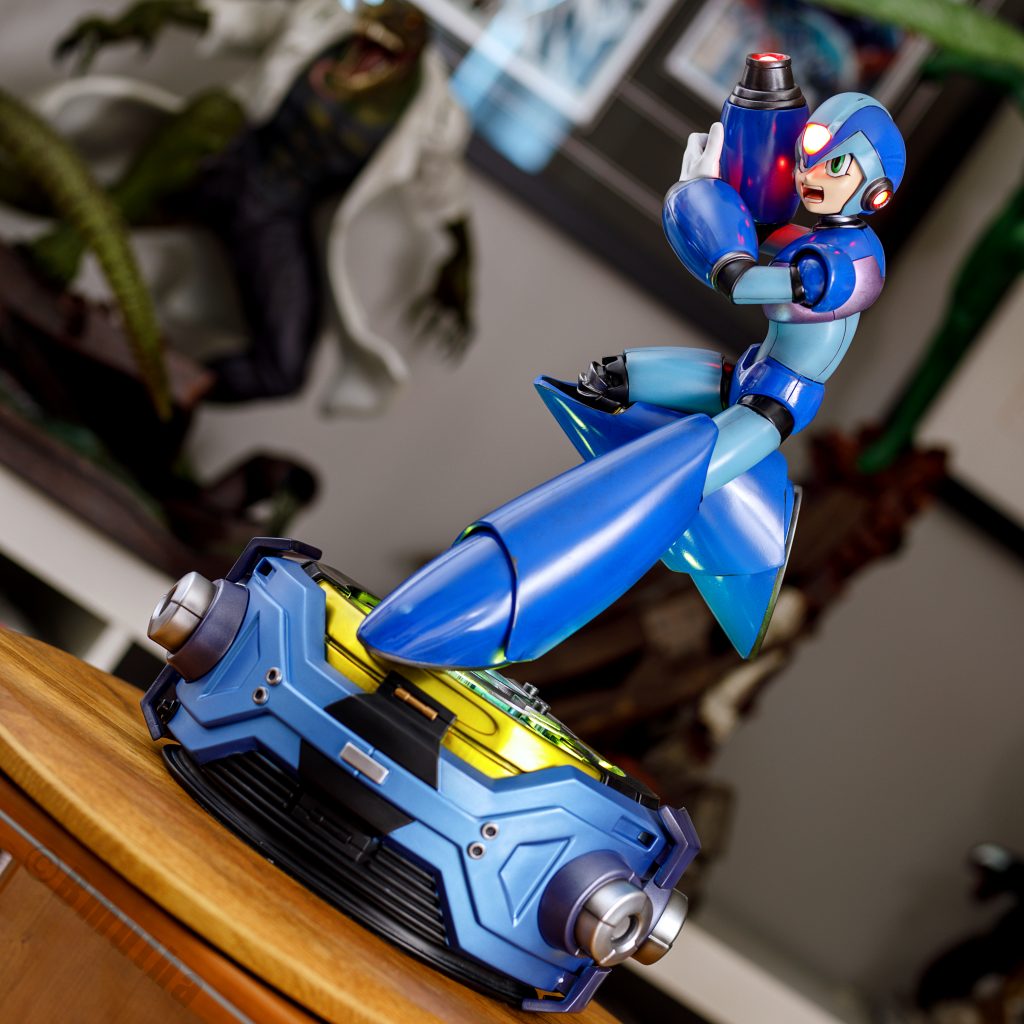 The statue is sculpted by HMO co-founder, Mufizal, in close concert with the creators and game designers at Capcom.  Capcom’s involvement is crucial, because even though this is HMO’s vision, you know this is still an authentic version of Mega Man.  Notably, the face really has that feel from the games and old school box art.  When this project/license was announced, I was curious how HMO would take a character that was born in the 8-bit video game era, and translate him into an interesting, dynamic 1/4 scale statue.  What they did blew me away!  First, they gave him a dynamic pose, with slightly curved armor that accentuated the sleekness of the design.  The knee and elbow bends are key design elements, allowing the underlying robotic aspects of Mega Man to be exposed.  Speaking of being exposed, Mega Man’s armor is actually removable!  Yeah, this piece is truly X-rated!  You will notice a slight seam on both legs and the blaster cannon where the armor panels are designed to split apart and be removed.  Although I plan to display mine with the armor on for the in-game look, it’s such a creative feature to see the underlying skeleton.  And just because it’s covered up, doesn’t mean they’ve spared any details there…it’s a full-fledged robot under the hood! 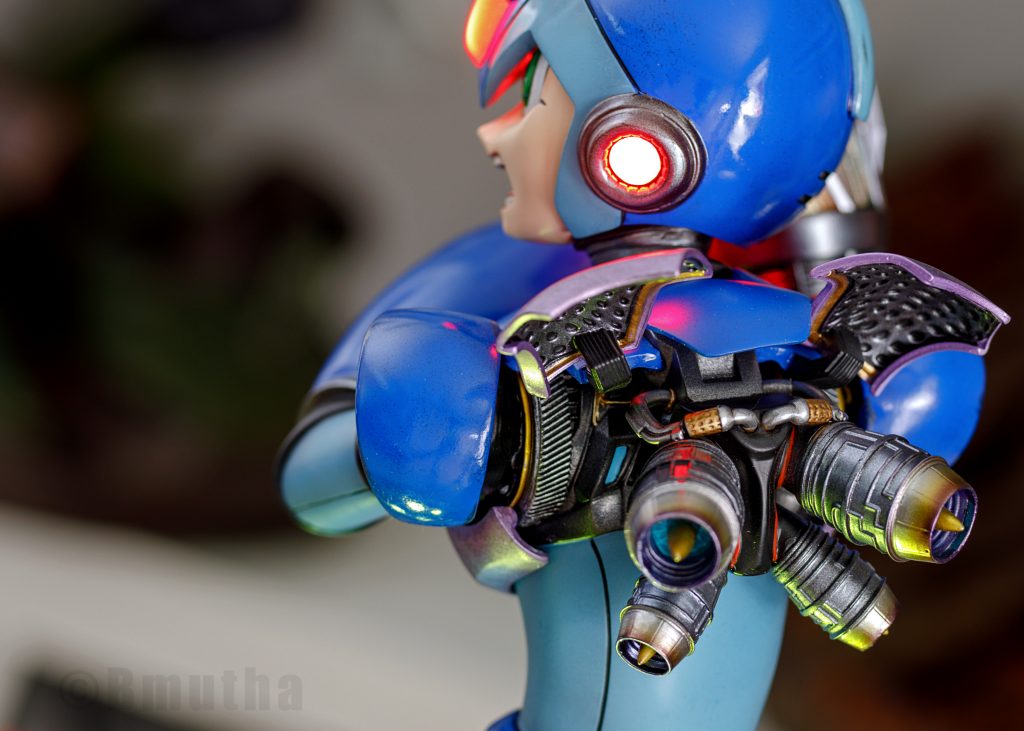 The packaging on this piece is remarkably sturdy, which is a good thing because by the look of the box, the couriers decided to kick mine across their warehouse a few…dozen…times.  The box actually has two brown shippers, the inner shipper box protected by foam corner pieces.  The art box has a removable lid and sturdy foam secured by Velcro straps.  Inside, the various parts are packed tightly with with extra bits of foam.  The statue arrived in pristine condition, despite it’s adventurous travel to my doorstep.

The statue itself feels extremely well built.  The base has very hefty weight to it (also note that the white plastic cover is another removable part!), but is not overly large, so this statue will not eat too much into your available display space.  Remember to put in three AA batteries in the compartment at the underside of the base before you assemble the piece!  Mega Man comes in three main pieces: the boy (which fits into the base with a metal peg…ensure it is seated all the way down, as this is the connection for the light-up feature), the head (again, ensure it is fully seated to power the lights), and the left arm.  A very thoughtful feature is the soft, velvety covering and extra soft padding on the inner faces of the removable armor panels.  So, thankfully, taking the panels on and off does not risk damaging the paint.  The connection key for the left arm is also wrapped in a soft padding, allowing it to slide into place smoothly and safely.

There are two options for his back: one plain, flat armor panel (finished with a beautiful, brushed metal look), and an alternate rocket booster pack…this is an original design by HMO.  What I love about the rocket booster is that is is so highly detailed, and exposed more of the inner mechanics of Mega Man’s robotic body.  As noted above, there is a light-up feature activated by a small switch along the bottom edge of the base.  The helmet, blaster cannon, and repulsors on his right foot all light up with a satisfying bright red.  The base, meanwhile, has a pulsating light for a unique look. 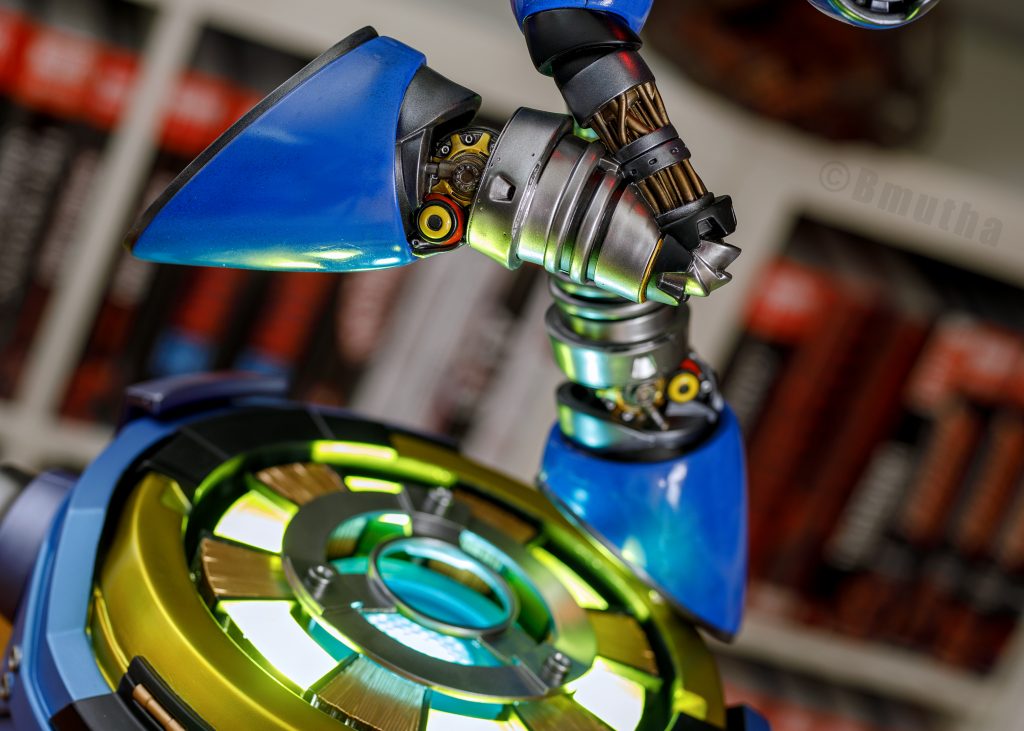 Paint-wise, you could not ask for more here.  The prototype paint design was completed by HMO’s paint master, James TCE.  James does such amazing work that I worry sometimes how the factory will handle it.  No worries here.  You have a rich, slightly glossed, almost royal blue mixed with a matte finish on the lighter blues.  Some of the armor accents have a bushed metal finish, with a slight hint of purple to them.  The Armour has a slight hint of wear and battle damage…not too much, but enough for that extra bit of realism.  Black accents, metallic silver robotic elements, and purply-black scorch marks on the rocket boosters and foot repulsors…not to mention the ultra clean black outlines on the eyes…this is a fantastic production paint job all around. 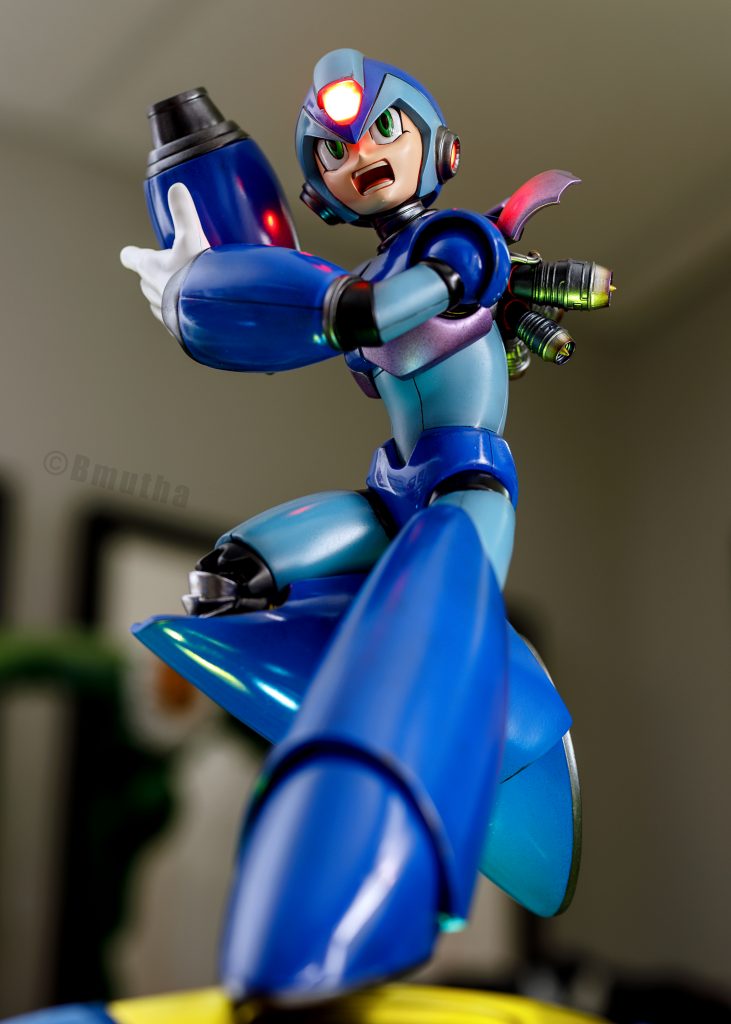 I am truly delighted with the production outcome for HMO’s Mega Man X.  The HMO team put in a ton of hours QC’ing this piece, and it looks to have paid off.  You get that warm, nostalgic feel from this piece, sure to bring back good childhood memories.  But, you also get the modernized, more realistic mechanical and robotic elements…this Mega Man has the  distinction of being both true to the source AND creatively unique at the same time.  Mega Man X will be a timeless piece that modern gamers, retro gamers, and collectors in general will be pleased to display on their shelves…and soon, he will be accompanied by Zero, who is currently being developed!