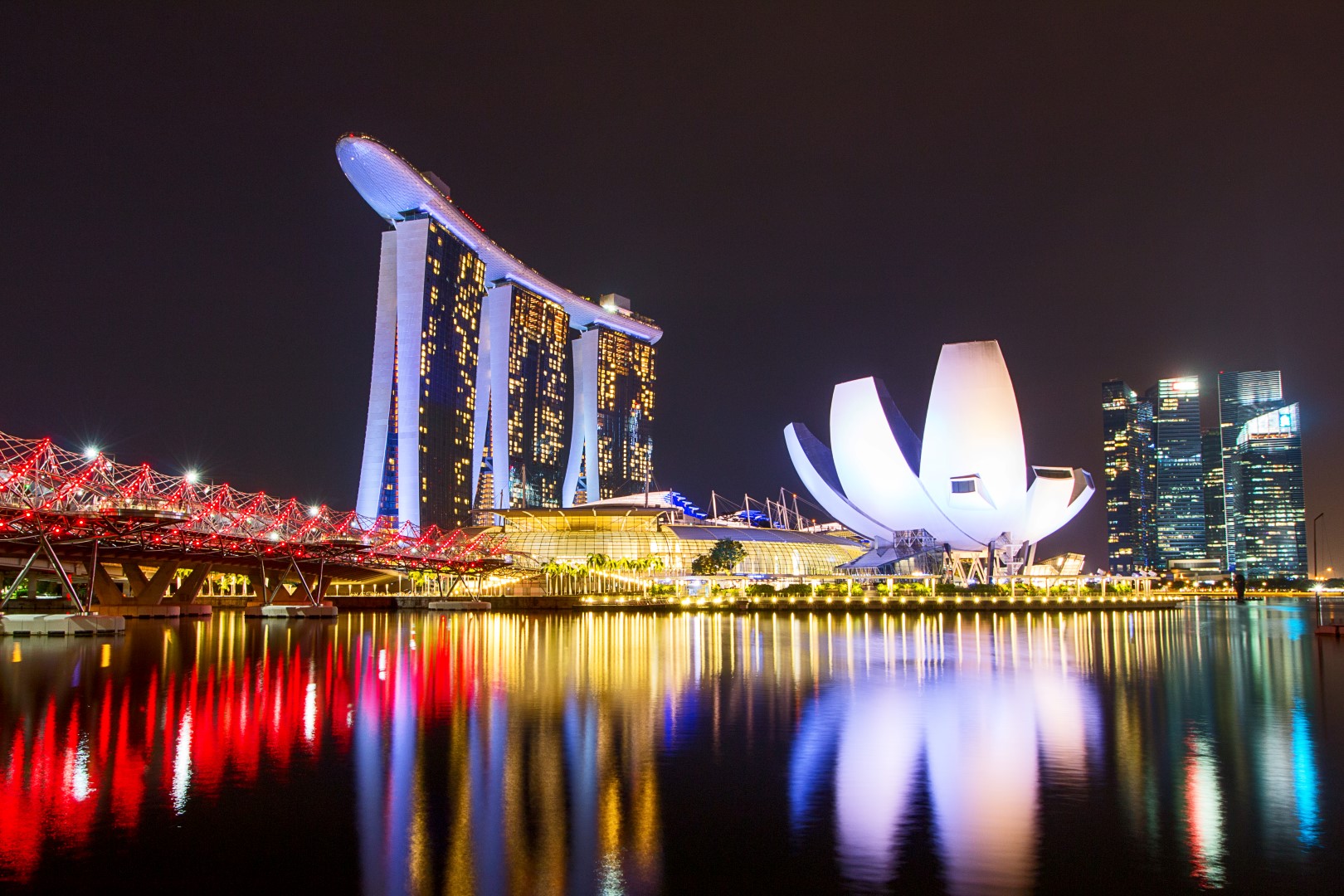 In September 2017, Bmutha.com was lucky enough to attend the 10th annual Singapore Toy, Game, and Comic Convention.  That beautiful facility in the photo above?  Yeah, that’s where the convention is held…the state of the art Marina Bay Sands.  Even though the humidity and I did not get along in my short time in Singapore, it was an absolutely amazing experience.  I had the chance to meet people and make friends from all over the world, and see the lovely sights of Singapore!  Oh yeah, there was a convention, too!

XM Studios had an amazing show, revealing some astounding new statues such as Hulkbuster, Weapon X, Predator, Moon Knight, Dark Phoenix, and the seductive Poison Ivy (seriously the most beautiful female statue I have ever seen!).

Also having a strong showing at the event was Hand Made Object (HMO).  Their sultry Morrigan made her debut at the show, and what a debut it was!  The rock formation base that comes together to form a skull, the glass eyes, and the paints that popped…she was stunning.  Also making a debut at the show was Sorrow, an upcoming hunter from the Bounties of Bathos statue line…the blood in the water effect on her base is second to none!

Please enjoy our coverage of the event below!

Dani Hinze, co-creator of the Bounties of Bathos world, took some time to tour us through the HMO display booth.  We take a look at all of their statues on display, including the Bathos pieces (Crow King!!!), Mega Man X, and Morrigan.

With so many eye-catching pieces on display, it was seriously hard to pick a top 5…but, somehow I managed to do it.  Which ones made my list?  Watch the video below to find out.

No statue company has been brave enough to take on the extended villainy of the Spider-verse…that is until XM Studios came along.  The full lineup of the original Sinister Six was on display, along with familial symbiotes, Venom & Carnage, Scorpion, super thief, Black Cat, and Earth-65’s very own Spider Gwen.

It’s not all about mainstream Marvel and DC at XM Studios, they also have the popular Transformers license, and some lesser know characters from Top Cow and Jade comics.  Take a look at what was on display below.

Some cosmic beauties from Asgard, everyone’s favourite horse-faced alien, and Bucky Barnes turned super-assassin are featured in this video.

Maybe the most creative line on the market today, these statues are part of XM’s original Samurai-themed Batman mythos.  Featured here are Catwoman, the Joker, and the absolutely stunning, Poison Ivy.

It’s hard to put into words just how enormous this X-Men vs Sentinel diorama really is…hopefully this video gives you a taste.  Oh, and a fully-painted Storm also made her debut at the event.

The 1/4 scale bust line from XM packs a ton of detail into a smaller package.  These things are absolutely gorgeous…the Thor could be the single best Thor statue ever made (my humble opinion, of course), and the Rhino’s teeth look so real, you’d swear they were harvested from some poor human (I couldn’t confirm that they weren’t!).  Also, sometimes it is forgotten that XM teamed up with HMO to produce the 1/6 scale Avengers Assemble line…the full lineup, including the gravity defying Falcon, was on display.

Since the debut of the movie way back in 2008, not too many Marvel characters have been more popular than Iron Man…and he’s never looked better as a collectible than he does here.  XM showed off the monstrous Hulkbuster statue (with Iron Man accessory), and the more minimalist but equally impressive, Classic Iron Man.

The monstrous Attack on Titan diorama from Figurama Collectors…the base is 24” diameter!

Looks a little tight in the frame compared to normal...lol. Must be an absolute beast!

After all of the the dust has settled from voting mayhem, the winners will be revealed for the 8th annual Statue Awards!

Tune in as Gina, Charles, and Kris reveal the winners from each category, including the prestigious Industry Award! ... See MoreSee Less

So hard to choose! This category is stacked

Excited for thanos haven’t received mine yet looks awesome, love that DD as well

Thanks all see you next year 😄

I lost all my votes

I win the statue ?

Sell me your thanos please 😄

Most Figurama statues only look good on Figurama pictures. This studio is all about promotion.

There is no fate but what we make.

So, go ahead and make your own fate with this new Terminator from Oniri Créations! ... See MoreSee Less