Well, the teaser trailer came out recently and did not show us much.  However, yesterday, shortly after an image “leaked” and ran rampant across social media, we got the full first trailer for Sony’s upcoming take on godfather of symbiotes, Venom.  Let’s break it down:

There is a lot to like about this movie so far.  Tom Hardy is an excellent actor, and I think he will nail this role.  They got the plural self reference that Spider-Man 3 so ridiculously ignored.  The internal power struggle between human and alien, walking the line between good and bad, is going to be an obvious, ongoing theme.  The teeth, the tongue…it looks like Venom has a very comic inspired look.

But, there are many obvious questions here.  Who are the other symbiotes and how many will they try to cram into this movie?  Woody Harrelson is in the movie and presumably playing Cletus Kasady, whom we all know is the host for the Carnage symbiote…will he play a bigger role in the movie, or will he be set up for a future sequel?  Hopefully they do not try to shoehorn too much into this movie, and don’t try to squish the entire Carnage story into the final act (this would be Spider-Man 3 all over again).

The obvious missing link is, of course, Spider-Man.  For me, Venom is, and always will be, a Spider-Man villain.  And, not just any villain, we’re talking one of his (arguably) top 2 or 3 villains of all time, for many, THE top villain.  We all know that the alien symbiote’s first “true love” is Peter Parker, and after Parker shuns it, the symbiote then bonds with Brock.  Their mutual hatred for Parker is what drives them.  From its time spent bonding with Peter, not only does it develop its spider-like abilities, the symbiote also learns all of Peter’s secrets and feelings…and this is what truly makes him dangerous!  I always think back to one of my all time favourite Amazing Spider-Man issues, # 317, where Eddie shows up at Aunt May’s unannounced, revealing that he knows Peter’s secret identity.  The tension was so thick you could cut it with a knife! 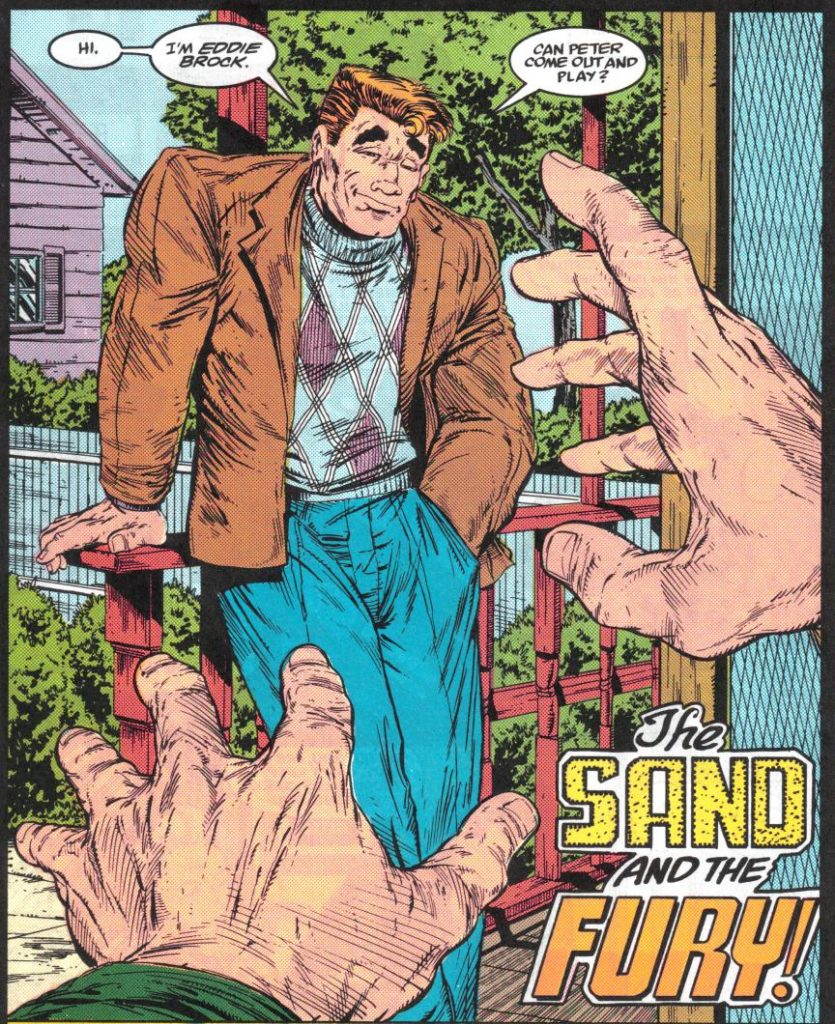 Now, we don’t KNOW that Spider-Man won’t be in the movie, that is definitely true. There have been various rumors of Tom Holland appearing in the movie, but nothing confirmed as far as I know.  But, even if Tom is in the movie, I am not sure that the Homecoming version of Spider-Man (if you can even really call him that) is at the point in his character development where he could have already worn the symbiote…he hasn’t even swung through Manhattan yet, and we’re supposed to believe that he has already conquered the monumental struggle of the alien suit saga?  More importantly, Sony and Marvel are glossing over one of the greatest comic book stories of all time (in my humble opinion)?

So, even if Spider-Man IS in the movie, a mere reference is not enough, in my opinion.  Spider-Man MUST wear the symbiote first, as this is what gives the Brock/symbiote union one of its primary motivations and what makes him so lethal as a Spider-Man villain.  We can only wait to see how this major part of the origin story is addressed.

For me, Venom without Spider-Man is not really Venom…BUT, this does not mean the movie could not be enjoyable.  I could very well walk out of that theatre (yes, I will be there opening weekend) feeling entertained…but, if they miss out on the Spider-Man connection, Sony and Marvel are really missing out on an opportunity for telling one of Marvel’s greatest stories (and to correct the mistakes from Spider-Man 3).

For now…WE wait for the next trailer to reveal more…

In order to prevent any potential confusion for our valued customers, we wish to inform you that we have absolutely no affiliation with a similarly named figure company called FIGURAMA (figurama.fr/). Again, we are not in any way affiliated with this company and the figures and statues sold there are not official Figurama Collectors products. We cannot assist with any purchases and/or complaints you may have with this other company. Please be aware and be cautious. To view official Figurama Collectors statues, please visit our website: figurama-collectors.com/. ... See MoreSee Less

Not sure I’m feeling the pose on this one…perhaps this is one that you need to see in person to appreciate…what do you think of this piece? ... See MoreSee Less

Latest bust from Queen Studios Collectibles goes up for pre-order right away!

This time, an unmasked Iron Spidey…what do you think of this one?

Also, notice that this bust is available in the US through Elite Creature Collectibles. ... See MoreSee Less

Here's some pretty cool insight into the people behind XM Studios. I've had the pleasure of meeting the team over the last few years.

Ben, Seng, & Clair - the three brothers that started it all - Alexa, Min, Marthin, Stanley, and Bryan when he was there...I wish you all continued success.

Now...where is that Bullseye statue you promised me?