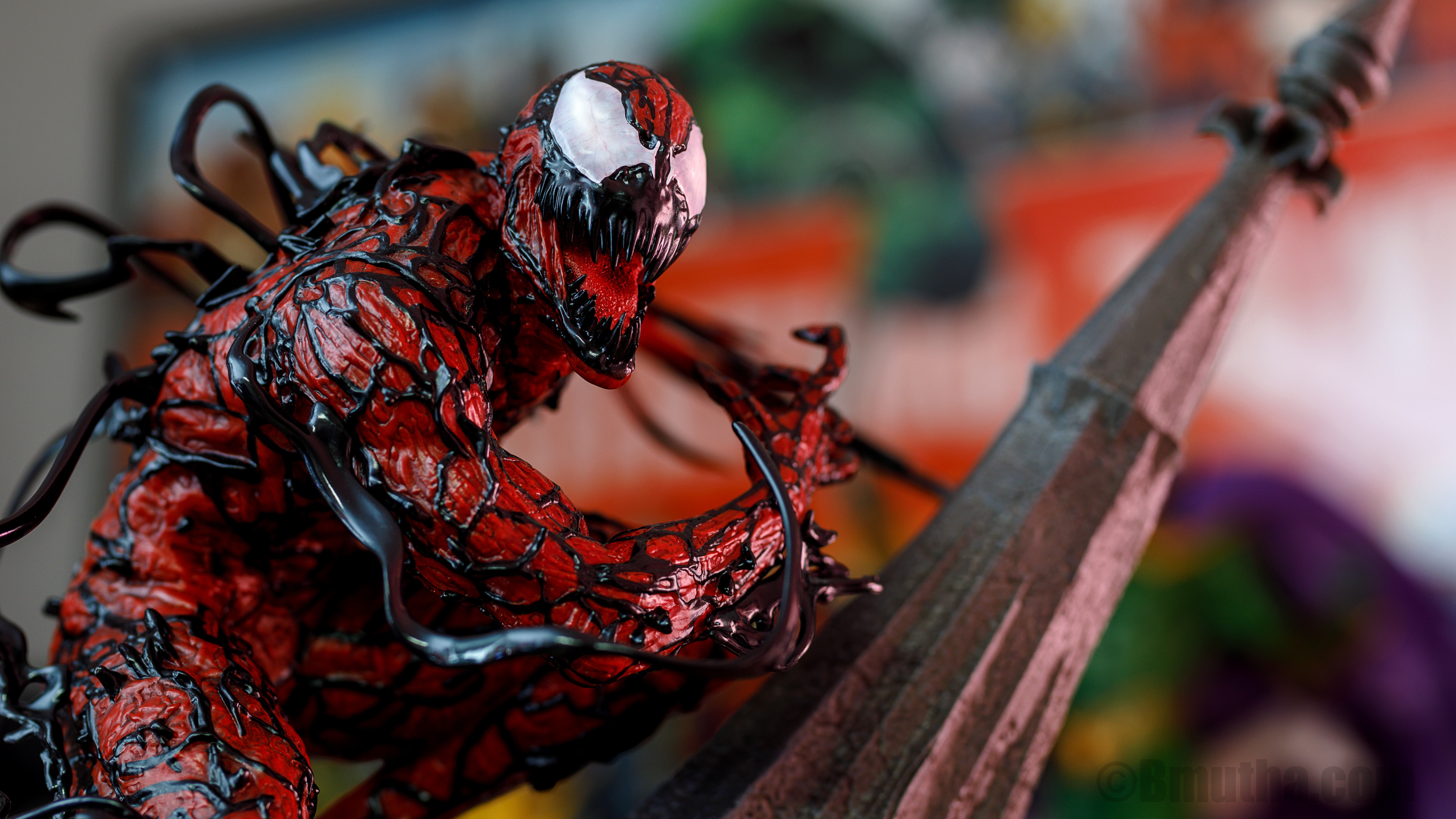 Real Name: Cletus Kasady
Height: 6′ 2″ as Kasady, 6’9″ as Carnage (but can be variable)
Weight: 190 lbs. as Kasady, 685 lbs. as Carnage (but can be variable)
Hair: Red
Eyes: Green
First Full Appearance: Amazing Spider-Man 361 (April 1992)
Powers:
Superhuman strength (can lift up to 90 tons), speed, durability, stamina, and healing ability.  The symbiote grants Kasady several “spider like” abilities, such as the ability to cling to walls and create and swing from tendrils/web lines.  Carnage can create detachable weapons (generally blades) that are made entirely of the symbiote itself
Trivia:
Unlike the Venom symbiote, the Carnage symbiote has merged directly into Kasady’s blood stream, creating a singular entity.  Carnage refers to himself as “I” rather than “we”.  Carnage is also the father of the symbiote known as Toxin. 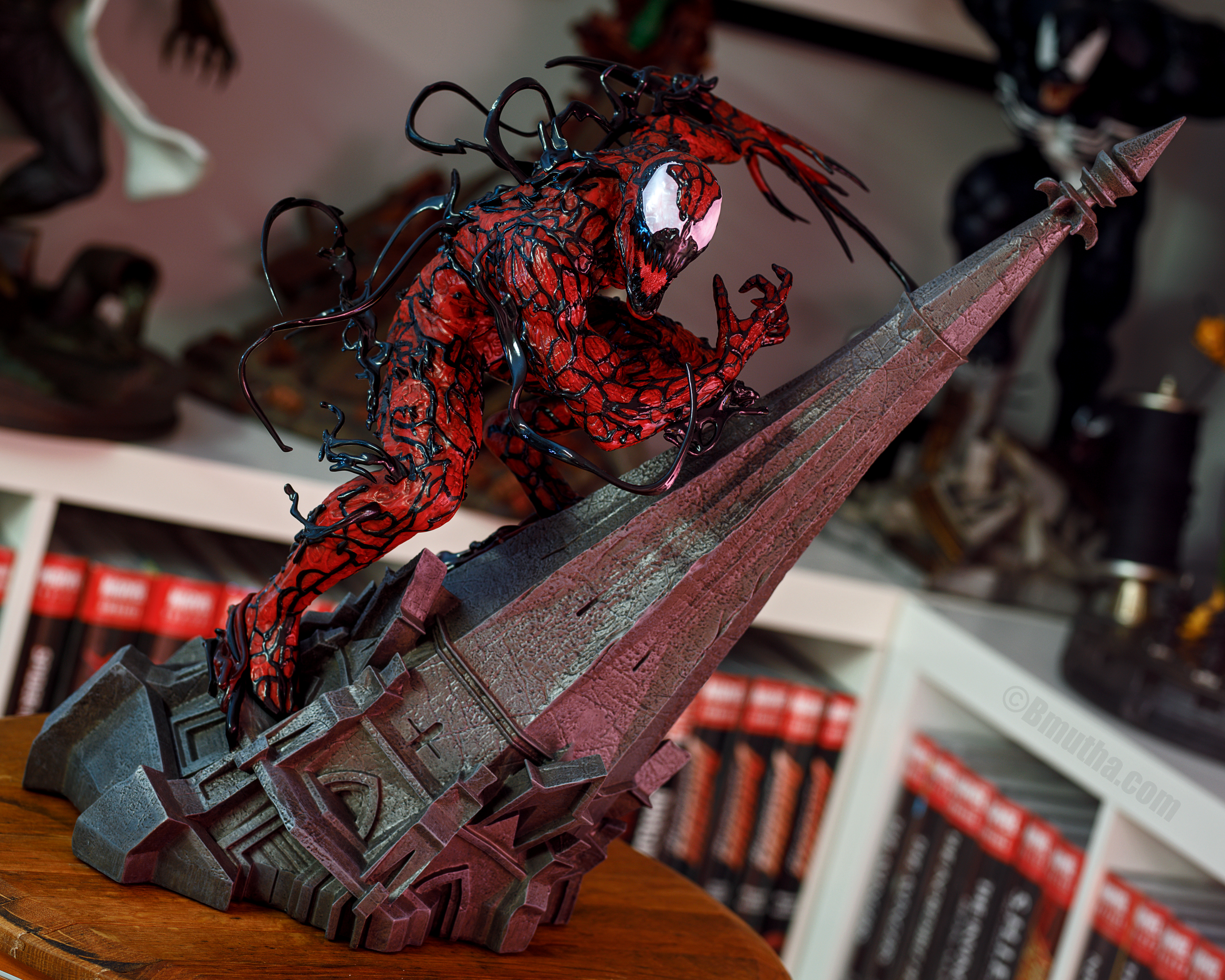 XM Studios Carnage statue has been the subject of a lot of criticism since its reveal.  Much like the namesake character, some people have almost literally gone insane with their hate for it.  I had the chance to see it at 2017’s STGCC (Singapore Toy, Game, and Comic Convention), and could not figure out what all the fuss was about.  Is it a perfect statue?  No, it’s not, it has some flaws.  Is it the worst statue?  Definitely not.  Let’s dive into this one in a bit more detail.

The piece was sculpted by the supremely talented Caleb Nefzen.  Caleb has also sculpted the likes of Scorpion and Moon Knight for XM Studios, as well as Figurama’s upcoming Devilman vs Amon diorama.  This piece definitely has a bit of his unique spin on it.

When viewed up close, the skin texture is made up of many sinewy, overlapping tissue strands.  This texture is quite organic and alien looking, which is very fitting for an alien symbiote.  The texture has depth to it, and I quite like the look myself, but I sense this texture is a source of some of the dislike from many people.  The obvious comparison is Sideshow’s comiquette released several years ago.  That piece had a texture more similar to human muscle tissue, and even though Carnage is not shown with texture in the comics, this looks had sort of become the accepted norm.  Ultimately, just two artist interpretations.

The body proportions are much more in line with what I envision Carnage to look like.  Carnage is typically shown as being slimmer and less bulky than his “parent”, Venom, and I definitely get that feeling with this piece.

The statue comes with three portraits: classic, morphing, and the “tongue” portrait.  The classic head is by far my favourite of the three, and I consider it an excellent rendition of the character.  The “taste buds” on the tongue add a little bit of horror and realism to it.  I all but dismissed the morphing head before receiving the statue in hand, but it is actually much more pleasing to behold in person.  Cletus truly has a deranged, murderous look in his eyes.    The tongue portrait, if I am honest, I do not like.  It does not give me a Carnage feel, and Carnage is not generally shown with a venom-like tongue.  Oh well, nice to have options and two out of three ain’t bad!

Speaking of options, there are several switch out arm options for you to choose from, including three right arms (one bladed, one with spiky fingers, and one with normal hand) and two left arms (one bladed and one normal hand).  I was dead set on using the bladed option for both arms, and that option does look cool, but since having this piece in hand I have gravitated towards the “normal” hand for the right arm and the bladed arm for the left.  You’ll surely be able to find a combination to your liking.

The base appears to be an overturned or partially crumbled spire of a church.  It has some nice texturing applied to it, and architecturally, looks nice.  The original renders had a symbiotic ooze climbing up the spire, but somewhere along the line of production it was deleted.  Too bad, as it would have added that “something extra” to the piece. 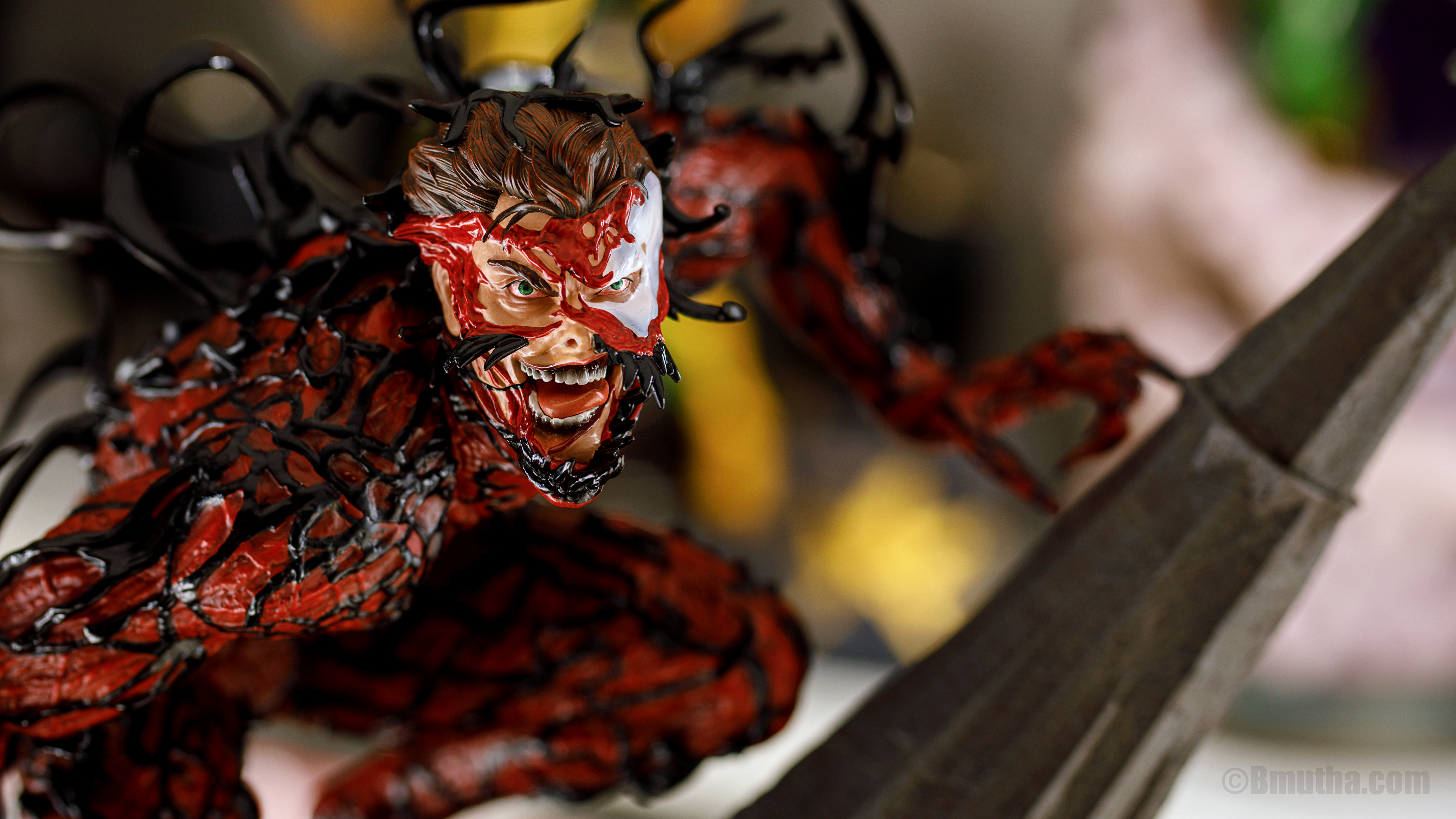 I always find that red paint is difficult to photograph, because it often appears to be overly saturated.  So, you may not get the full impression from my photos of this piece.  I alluded to the depth of the skin texture above…the statue has a two-tone red, with the “deeper” parts a darker red than the “upper” parts.  This contrast really helps bring out the texture when viewing with the naked eye.  The glossy black tendrils look great, and the black ooze running all over the body is painted very satisfactorily with little to no slip ups.  The white eyes are shaded with a light grey along the edges, and if you look closely, you will see the tiny vein work as well…it’s a very cool effect that really gives the eyes some life.

The base is again left looking quite plain in the paint department.  It’s primarily grey with some hints of brown shading.  Not much to complain about, but also nothing to really love about it…again I am wishing they had kept some of the ooze on the base.

Overall, though, the paint on the piece is more than acceptable. 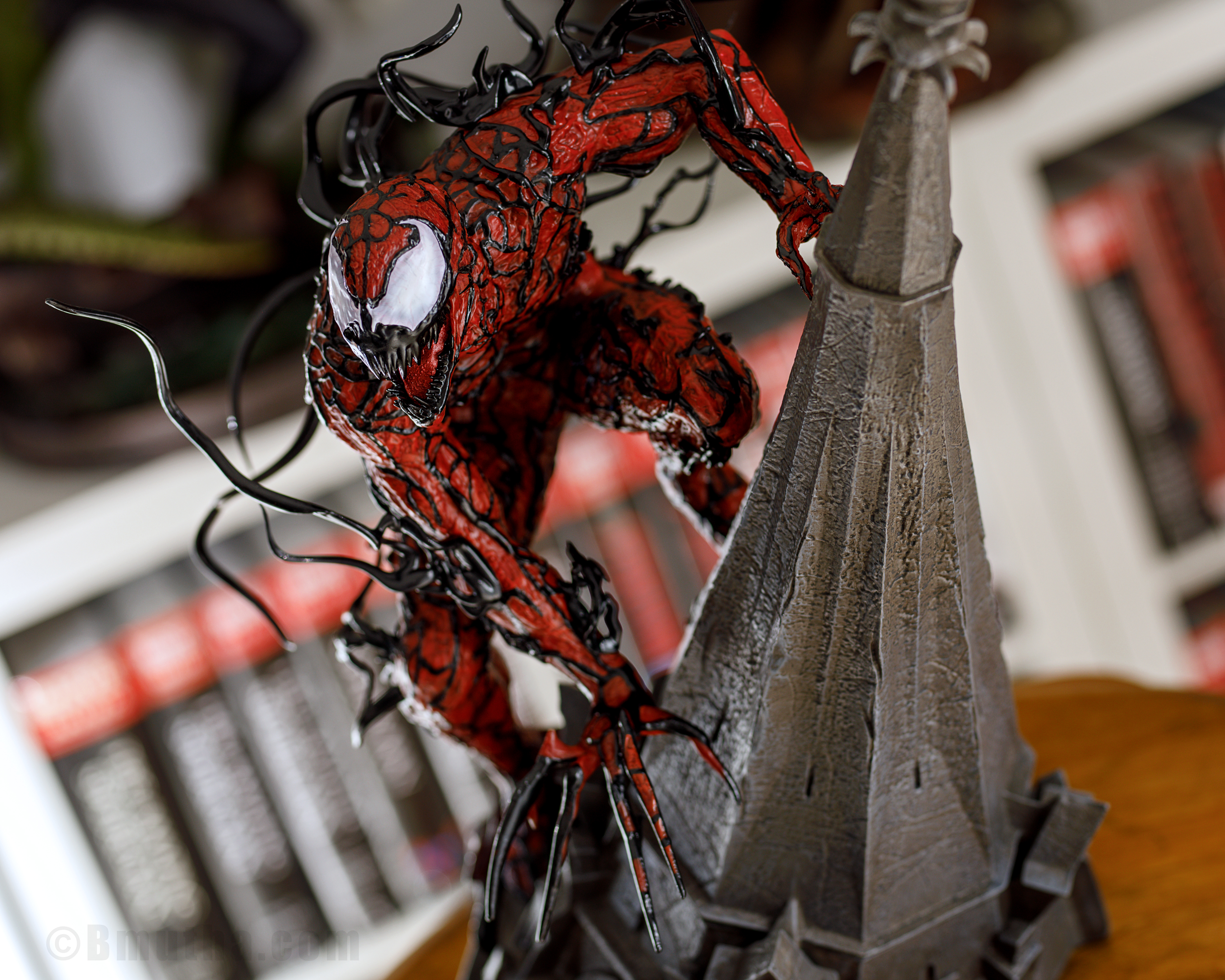 The statue has the familiar XM quality: great packaging, nice weight, strong magnets, and well fitting parts…for the most part.  The tendrils are…I won’t say problematic, but let’s say some may require some love.  Most fit into place easily, some require a little bit of convincing, and a handful are a tad loose.  I used a dab of sticky tack on some to help hold them into place, and it seemed to do the trick.  Although each tendril slot is colour coded, when pacing the tendrils, you are going to want to consult the assembly guide that comes with the statue to ease things along.  The majority of the tendrils only slot into the body one particular way; however, one at the upper right of the back (# 16 in the guide) seems to go in two ways: pointing off to his left (as I have it placed in my photos), or turn it a full 180 degrees to point off to his right.

When placing the “normal” left arm or the “spiky finger” right hand on the body, take note that the fingers come very close to the base…you don’t want to snap off the fingers accidentally, so just take extra care with these arms. 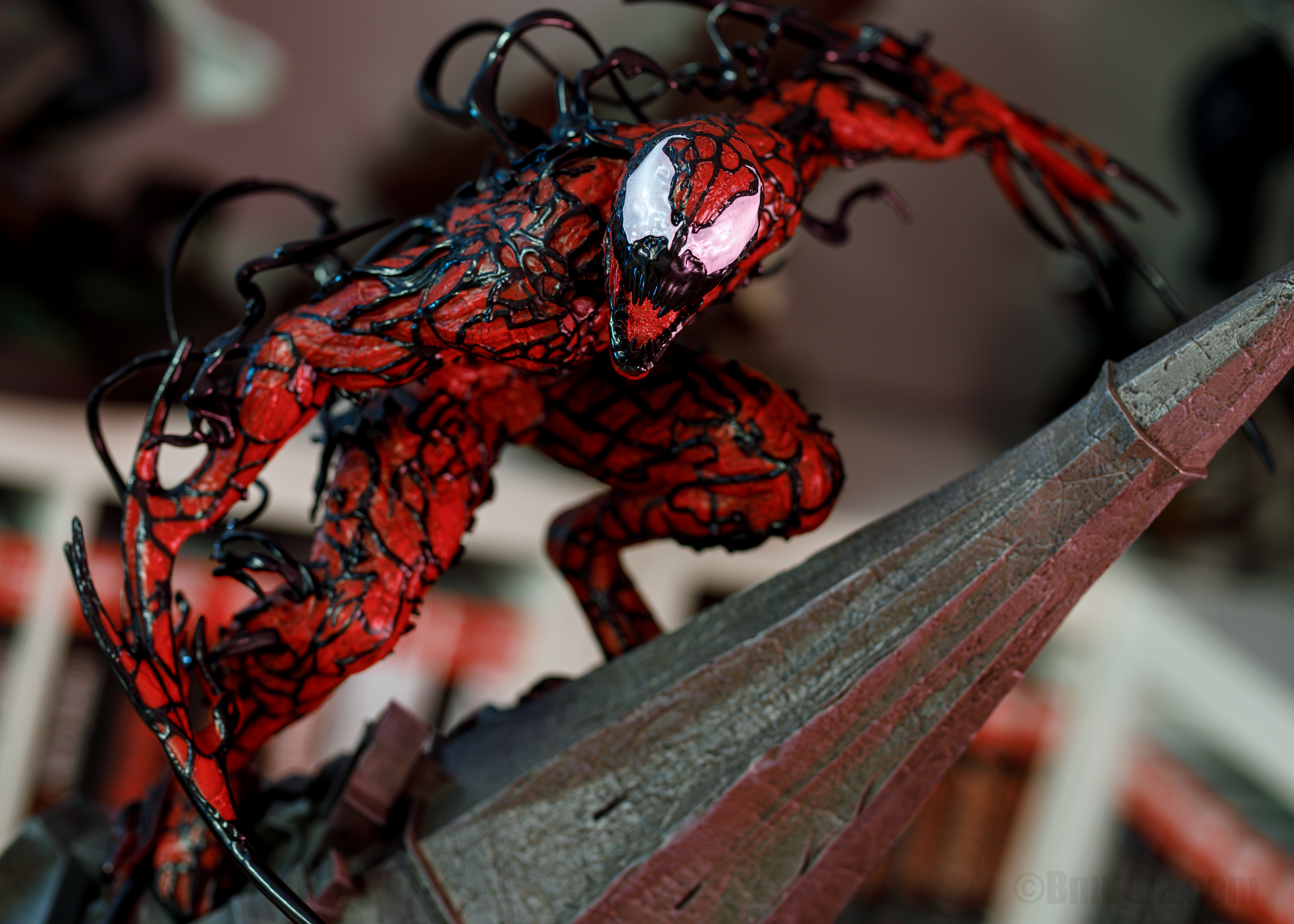 As I said off the top, XM Studios’ Carnage is not a perfect statue.  Some of the tendrils fit fairly loose, the tongue portrait is less than desirable, and notably, the base is fairly plain.  However, the positives far outweigh these negatives.  The classic portrait is one of the better I have seen for the character, the two-tone red paint and the sculpted texture on the skin add an organic, alien feel that suits the symbiote perfectly.  Carnage’s body proportions are suitable for the character’s comic book appearance, and you get several change out arms to customize your display.  This Carnage from XM Studios piece is worthy of being in your Spider-verse display, no doubt.

In order to prevent any potential confusion for our valued customers, we wish to inform you that we have absolutely no affiliation with a similarly named figure company called FIGURAMA (figurama.fr/). Again, we are not in any way affiliated with this company and the figures and statues sold there are not official Figurama Collectors products. We cannot assist with any purchases and/or complaints you may have with this other company. Please be aware and be cautious. To view official Figurama Collectors statues, please visit our website: figurama-collectors.com/.

Not sure I’m feeling the pose on this one…perhaps this is one that you need to see in person to appreciate…what do you think of this piece?

Latest bust from Queen Studios Collectibles goes up for pre-order right away!

This time, an unmasked Iron Spidey…what do you think of this one?

Also, notice that this bust is available in the US through Elite Creature Collectibles.

Here's some pretty cool insight into the people behind XM Studios. I've had the pleasure of meeting the team over the last few years.

Ben, Seng, & Clair - the three brothers that started it all - Alexa, Min, Marthin, Stanley, and Bryan when he was there...I wish you all continued success.

Now...where is that Bullseye statue you promised me?